Alexander Murray & Co produce some of the finest Scotch whiskies in the World and now their brand will be on the 2018 BRW team kit and referees strips.

BRW Founder Ashleigh Walters said “The relationship with Alexander Murray & Co has been brewing, no pun intended, since meeting up with Steve in Twickenham last March and then bumping in to him in Auckland NZ for the Lions 3rd Test where we sampled a few drams of Alexander Murray’s finest. It’s amazing how rugby can bring people together. I am really please to have Steve and his team on board”.

We live for exceptional whisky. It’s our passion and our livelihood. So it’s hugely personal to us – as a result, we have, over the last 25 years been lucky to have experienced some of the finest Scotch whiskies ever created, at the very places they were conceived.

Imagine if you will, being on the windswept beaches of Islay and turning your collar to the cool ocean breeze blowing off the North Sea. Now, imagine in your hand a warm glass of Bruichladdich, a 1992 distillation, matured in some of the finest oak casks, every sip creating an explosion of flavor and warmth and a natural defense against the ocean’s chill. That moment, that experience is what we work every day to bring you in every bottle of Alexander Murray we release

We can count as friends, distillers and whisky people from Scotland and throughout the world. Through these relationships, built up over the decades, we have access to some of the very best and rarest whiskies produced by the most well-known distilleries in Scotland.

1911: There, in the rolling fields of the North-East of Scotland, on a small farm, a boy was born. This boy, named Alexander Murray, would grow up working the farm, which helped shape his character and view on the world. Alexander Murray would become a true individual and independent thinker, and would influence many of those around him, including his young nephew, Steve Lipp. 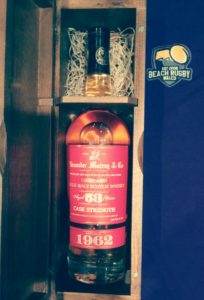 2004: Steve, now a fully grown man, having cut his teeth working for a number of independent whisky companies in Scotland in the 1990s, founded Alexander Murray & Co LLC and the Alexander Murray brand in his new home, California; naming the company after the Great Uncle who gave him his very first taste of Scotch whisky; ‘the water of life’.