Beach Rugby is played as touch rugby, but the matches can be very physical. A few touch rugby teams that have previously taken part haven’t reached the pool stages due to the physicality of the competition. 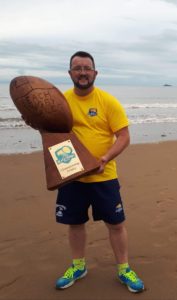 From 6 teams in 2006, over the years the tournament has grown from strength to strength with this year 48 teams taking part in 2022, with teams entering from all over the UK.

The tournament has become so popular that the teams taking part plan their end of season tour or pre-season around the day and use it as a team bonding weekend. It is a fun day and suitable for all the family, whatever the weather. Apart from the very first tournament when the weather wasn’t on our side, every year we have been very lucky with the weather and hopefully will continue on each tournament day, rain or shine we enjoy the day.

I am very proud with the development of Beach Rugby Wales over the last few years years and without the support of the teams, sponsors and supporters, the tournament wouldn’t be as successful as it is today. The day is a ‘Festival of Rugby’.

I look forward to seeing you all at our 16th annual tournament on the 17th June 2023.