What an eventful day, after 2 months of soring temperatures, the Big Man up stairs decided to let all hell break loose at the StudentDigz Beach Rugby Wales tournament with torrential rain, thunder, lightening and winds gusting up to 70mph. However that did not stop the teams from taking to the golden wet sands of Swansea Bay.

The official programme for the day would have seen over 80 matches being played, but due the inclement weather and fear for player safety, Tournament officials and team captains decided that the tournament should be cut short. With all the teams playing equal amounts of matches and a result was called by the top two teams in each competition playing against each other in a final. 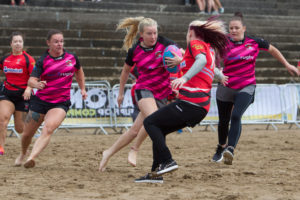 We just want to thank all the teams and sponsors without which the tournament would not be able to go ahead, thanks for your support.

Beach Rugby Wales WILL be back next year, bigger, better and dryer….lol